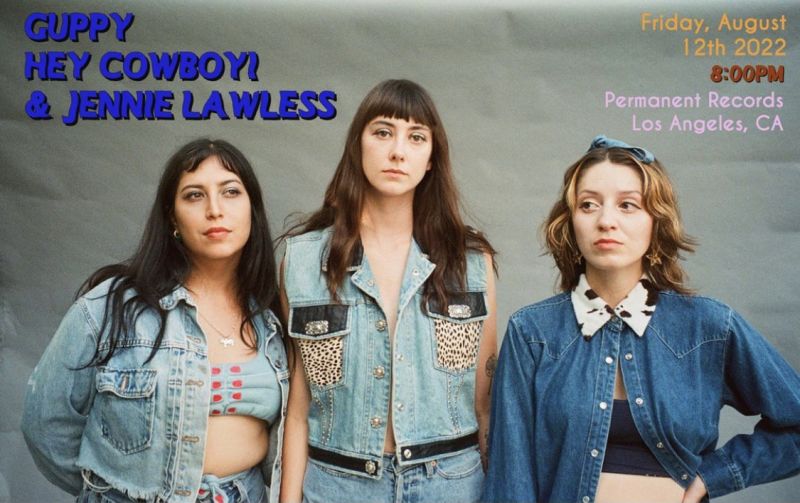 The band’s lush, sunny vocal harmonies led them to expand their musicality, moving beyond their garage punk origins into the realms of power pop, disco, country, and surf rock, as can be heard on their newest album Big Man Says Slappydoo! produced by LA tenderpunk hero Sarah Tudzin (Illuminati Hotties). Tudzin brings GUPPY to a new level sonically, building out whimsical bangers by weaving in sounds of theremin, autoharp, microwaves beeping, and band members belching. This all adds to the lush landscape of Power Pop, Surf, Rock, Country, and Indie that makes up the GUPPYverse. When asked what genre they play, the band responds candidly - Secular Guitar Music.

GUPPY has carved a deep niche for themselves in the LA punk scene with their energetic and joyous live shows, playing with the likes of Cheekface, Rosie Tucker and Sports Team. GUPPY is your friend, and GUPPY is the future. You don’t even need to keep your ear out for this band because they are actually right behind you. Haha got you.

Three gals creating synth pop sounds, and no guitars allowed. “Micah Vargas, Sydney Harding-Sloan, and Gaby Rodriguez have crafted a unique blend of ethereal, sun-drenched pop that begs you to sway into the light with them.”

Hey Cowboy! has released two full length albums, “The Soft Kind” and “Get in My Fanny Pack and Let’s Go” featuring their most popular hit, “Cherry Jerry Citrus”. Their latest single, “Not 4 U” is only a taste of what is to come, and believe it! There will be a lot of dancing.

Jennie Lawless is a songwriter/producer/artist based in Los Angeles. They grew up twenty miles northwest of Chicago in a strip-mall studded town called Mount Prospect. Before moving to LA in 2019, she released a debut EP, Two Songs, in 2018 while living and performing in Minneapolis. Their latest EP, I Am Here To Make Friends, is an ode to deepening relationships and departing from isolated selfhood. Jennie writes playful songs driven by quirky synths, lush harmonies, and sincere lyrics.