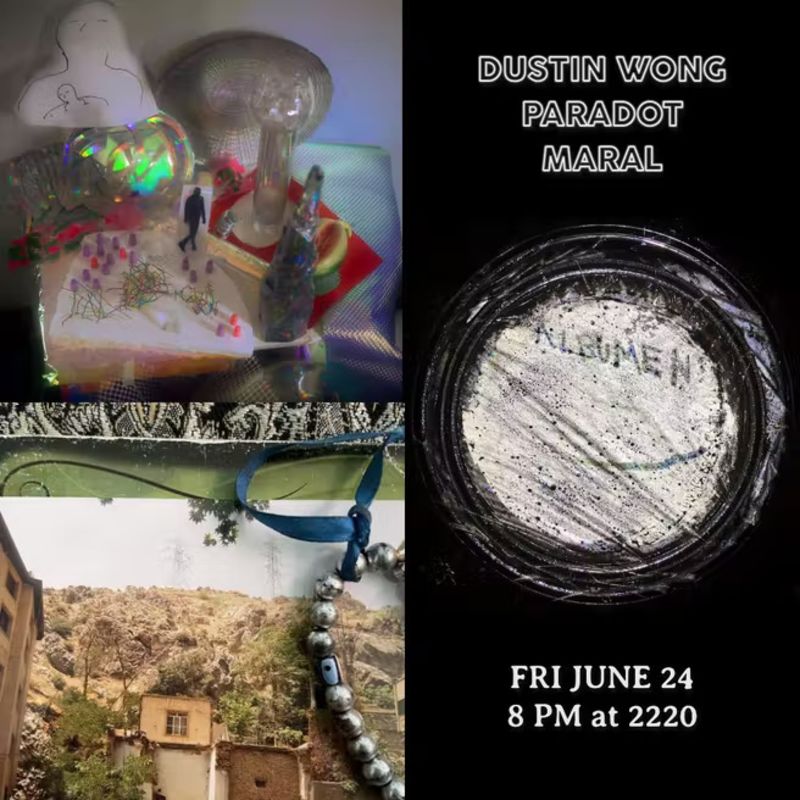 Maral’s sonic palette incorporates a collage of Iranian Classical & Folk samples and explores genres of experimental electronic production such as noise, punk/post-punk, and dub. Maral is currently working on her follow up to her critically acclaimed debut record “Push” (Leaving Records 2020). She has collaborated with artists such as Lee “Scratch” Perry, Panda Bear, Penny Rimbaud of Crass, Anika and more.

Paradot is the Joshua Tree-based collaboration between Emilía Turner and Jodoli, formed in 2017. Primarily focused on experimental electronic composition, the duo has released two full-length albums - Conductor (2018) and Vain Zanni Cave (2019) - with a third out in June 2022 via Cudighi Records. Their sonic work strikes a balance between pop structure and anti-structure, often within the same piece, and utilizes found materials/samples and sound collage. The collaboration is process-oriented and engages visual art, sculpture, video, and performance art techniques during the production of a piece. They have performed across the US in support of Avey Tare (Animal Collective) and Justice Yeldham (legendary Australian noise artist).

Dustin Wong played in the bands Ecstatic Sunshine and Ponytail and collaborated with Takako Minekawa on three albums. He has toured the US and Europe numerous times opening for bands like Beach House, Weyes Blood, Mountain Goats, Animal Collective, and Mac Demarco. He has been involved in numerous scenes from Baltimore, New York, Tokyo, and now Los Angeles. He is currently collaborating with Brin and has had an art installation at the “Philosophical Research Society”.