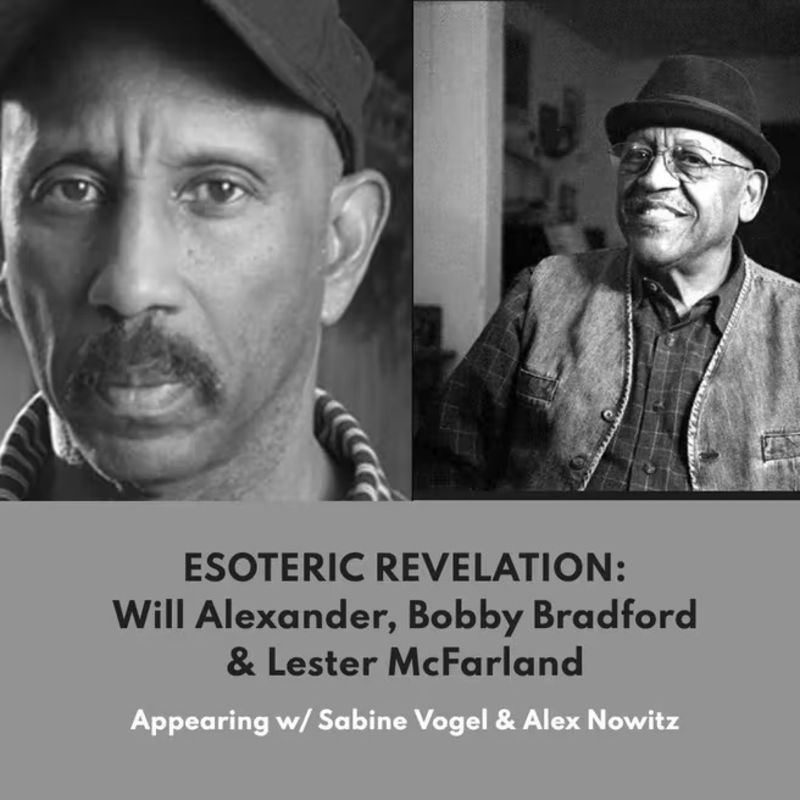 ESOTERIC REVELATION is a new Angeleno trio featuring Pulitzer-prize finalist Will Alexander on piano, the cordially legendary Bobby Bradford on trumpet and the forest of foundation Lester McFarland on electric bass. While working together on occasional projects over the years, these three stalwarts of deep consciousness have joined forces to turn a few new blue notes into total time suspension.

Where virtuosity meets vulnerability is the place where Sabine Vogel and Alex Nowitz begin with their music. Each uses their body and its physical relationship to its instrument––flute for Sabine, mouth/voice for Alex––as the basis for humblingly profound explorations of personal sound. They’ll each play solo and join the trio for a world premiere quintet improvisation. An apex of intimate musicality awaits.

Sabine Vogel is a world class composer and improvisor who has played with George Lewis, Anthony Braxton, and Magda Mayas among many others.

Alex Nowitz brings a punk and jazz background to his work in sound poetry, gesture-controlled electronics, and what he calls multivocality. Collaborators include Sten Sandell, Tomomi Adachi, Magda Mayas, and many others.

Bobby Bradford (1934) is a jazz trumpeter, cornetist, bandleader, and composer with a formidable career. He developed a distinct language with John Carter and has performed with Eric Dolphy, Ornette Coleman, George Lewis, and many others.

Will Alexander is best known as a poet that brings cosmic consciousnesses into illuminated availability. He’s also been teaching himself the piano for 30+ years. Author of Vertical Rainbow Climber, Kaleidoscopic Omniscience and The Sri Lankan Loxodrome among many others.

Lester McFarland has played bass for most of his life, extending its reach from foundation to orbiting sundial, gospel to bluegrass to funk to now.