Join What The Sound for another one of our evenings filled with music you’ve got to know about! We’re thrilled to announce a stacked lineup with local artists. We are celebrating single releases from Small Forward & Cape Weather! The show is 21+ and will be happening at Gold-Diggers in Hollywood, Los Angeles on Tuesday, February 18. The price of admission is $10 in advance and $10 day of show. Tickets are available online and at the venue, day of show. Doors will be at 8:00PM and music will begin shortly after.

Here’s what you need to know about the groups performing:

Small Forward is the recording project of Rounak Maiti, Michael Stevenson, and Campbell Scott. The three met at college in Los Angeles, garnering attention through releasing demos online and playing shows within the DIY community across LA. With their debut full-length record, the self-titled ‘Small Forward’, the band puts together a collection of songs that mirror the diverse experiences and inspirations that have defined its songwriting. Richly layered and textured, the album strides through guitar strummed nostalgia and classic West Coast psychedelic pop, creating an emotionally stirring and genre-bending affair. To mix the record, Michael, Rounak, and Campbell teamed up with veteran producer/engineer, Jarvis Taveniere, whose expertise brings depth and clarity to the band’s self-produced recordings. The resulting collection of songs are Small Forward’s strongest to date, vulnerable, textured and immersive— an album created by friends living across Mumbai and Los Angeles, yet bound together by the fabric of their music.

Cape Weather is the collaboration between Natalie Smith and Eric Jackowitz, college best friends turned co-creators over their shared love of power pop and the cult classic movie “So I Married an Axe Murderer.” Though both have been entrenched in recording and releasing music for years (Smith under her solo moniker, Jackowitz with artist Nick Waterhouse and musical comedy group The Cooties) Cape Weather became a sound fused with “nostalgic indie-pop melodies”. Their first single “Telephono” debuted in 2018, which garnered favorable nods from the likes of NPR and the405, and their self titled ep was released shortly after.

With new music nearing finishing stages, the band is plotting a release on the very near horizon 🦎

Pageants - Diaristic yet dreamy and abstract in nature, Pageants merges pop levity with melancholic lyrical undercurrents. Sharing sensibilities honed in their teens during their time with Avi Buffalo, Rebecca Coleman and boyfriend Devin O’Brien started Pageants in 2011 as a duo with a DIY attitude. With plenty of diversions along the way, including O’Brien being picked up by Cherry Glazerr as their bassist, they released their debut album, ‘Forever’ in 2018 via their own Eye•Dull Records. O’Brien left Cherry Glazerr earlier this year and Pageants is picking up where they left off releasing and gigging new material.

Shared by What The Sound 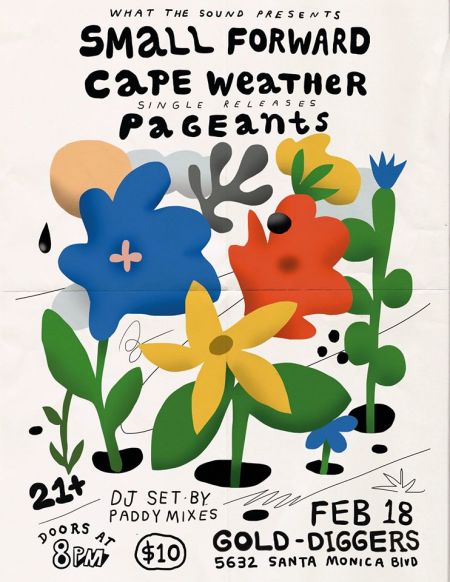